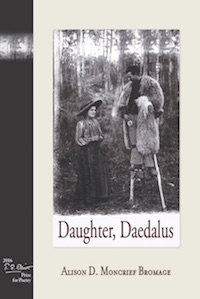 Daughter, Daedalus is Alison Moncrief Bromage’s debut book of poems and the 2016 winner of the T.S. Eliot Prize for Poetry from Truman State University Press. Daughter, Daedalus is a siren song composed of loss and beauty. Moncrief Bromage uses detailed themes of mothering and barrenness so wonderfully interwoven that readers will feel the pain and want as seeming simultaneously just out of reach and attached to the soul. In her collection of apostrophes and open letters to the mythic inventor Daedalus and her daughter, Moncrief Bromage hauntingly presents intersections between the natural laws of the physical world and the powers of mystery, creation, and myth.

“Daughter, Daedalus is both original and very often masterful. From the very first poem, the reader is taken in by the language and inventiveness. There is also an elevated High Church intention—a scent of incense and bells chiming—that T.S. Eliot would have recognized.”

“…“Daughter, The butchers will slaughter” is a poem of halting irreverence and haunting subversion. Several years ago, after a reading I had given, a graduate student approached me to say that my poems were, in her opinion, “metal.” I faked gratitude for the remark, having no idea what she meant. “Daughter, The butchers will slaughter” brought that comment spinning back to me because it is indeed metal, standing out by refusing to turn away from the violent realities of its world: “The butchers will slaughter a flock of old laying hens / and will collect from their guts a bowl of yellow yolks, / unshelled and clustered like grapes.” When it’s revealed at the poem’s conclusion that “the butchers are nuns,” the reader is left with the blood in his ears positively ringing…”

— from F. Daniel Rzicznek’s review of  Daughter, Daedalus in The Literary Review